Read the revealing results on a statewide survey on Co-Teaching.


In 2016, the State Education Resource Center (SERC) conducted a survey of participants who had attended its statewide or in-district trainings over the previous five years on the topic of Co-Teaching. The results, used in conjunction with session evaluations, would provide additional feedback on our professional development activities and help further inform future programming.

Responses were received from 43 districts that had either sent co-teachers to a statewide training or contracted with SERC for training and technical assistance on the topic of Co-Teaching. SERC received approximately the same number of responses from Special Education Teachers and General Education Teachers, with 50% of respondents from the high school level, 37% from middle school, and 13% from elementary. Three-quarters of the respondents reported attending the training with their co-teacher.

Feedback on Co-Teaching Approaches Used – Of the six co-teaching approaches covered in SERC’s training, respondents indicated that One Teach/One Assist was the most regularly used, with Station Teaching and Teaming the second and third most popular choices. 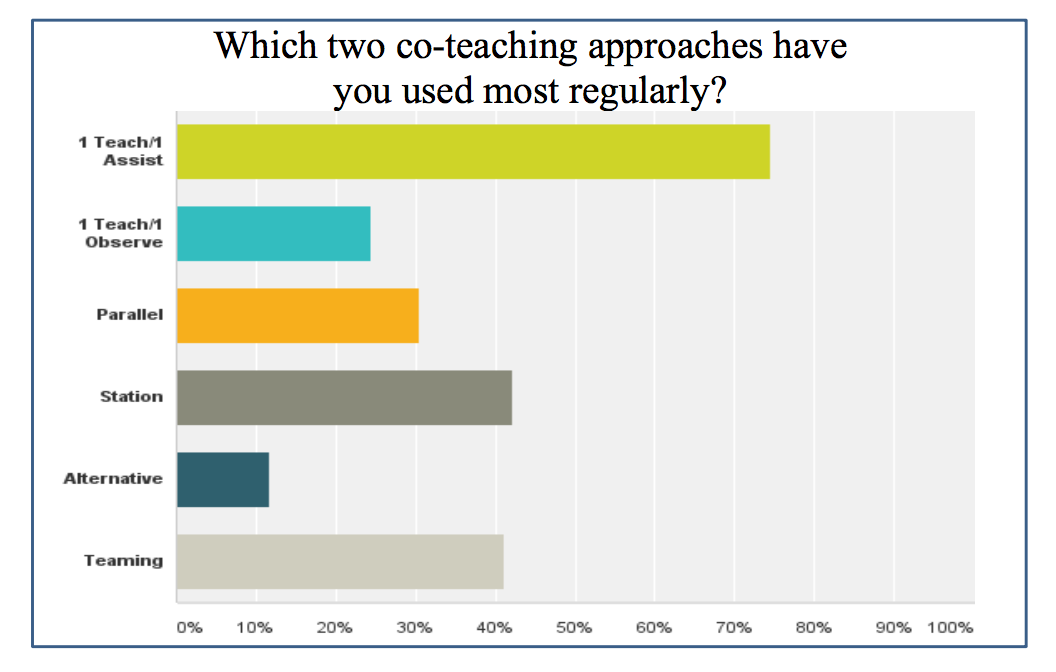 While 30% of the respondents reported using Parallel Teaching regularly, they said it was the most difficult approach to implement. On other questions, respondents indicated that their students both received the most benefit from Station Teaching and enjoyed this approach twice as much as any of the others.

Planning Time – Of those co-teachers who spent time co-planning, 30% spent 30-45 minutes a week planning together. However, 67% of them spent less than that amount, with 23% spending 15-30 minutes, and 24% spending less than 15 minutes weekly.

Most Challenging Aspect of Implementing Co-Teaching – In the survey:


Administrator Support – The most common ways administrators supported the implementation of co-teaching in their buildings were:


Other means of support included: